The Nintendo Zapper is a classy light gun with iconic feel and sound. However for competitive play a stock Zapper is not my choice for two reasons: First: The trigger pull is too high. Generally in all firearms a high trigger pull causes a wiggling hand thus causing inaccuracy. Second: The gun is loud. If you play in a flat with thin walls at night the sound could get an issue.


Years ago I looked for alternatives. First I bought one of the Zapper reproductions made by retro-bit. There are plenty of similar products around. While they are pretty decent, less loud and have a lower trigger pull, they suffer from their low manufacturing quality. They just don't feel as good as a Zapper.


Then I got a Gun which is the Japanese equivalent to the zapper. While being very cool and of high build quality it has the same flaws as the zapper. Actually it might be even a bit louder.


Next I purchased a Hyper Shot. This is an excellent light gun. I really love its trigger mechanism which fires the shot by releasing the trigger, rather than pressing it, which yields in pin point accuracy. Sadly the gun is quite heavy.


After facing this useful mechanic I went to modify my Zapper to behave the same way. One can do this by removing the springs 5 and 6 and interconnect the two white actuator parts at 3. Personally I wanted the modification to be reversible and therefore I made a new actuator of oven curing putty. While having the Zapper open I took the opportunity to swap the switch for a cherry one. 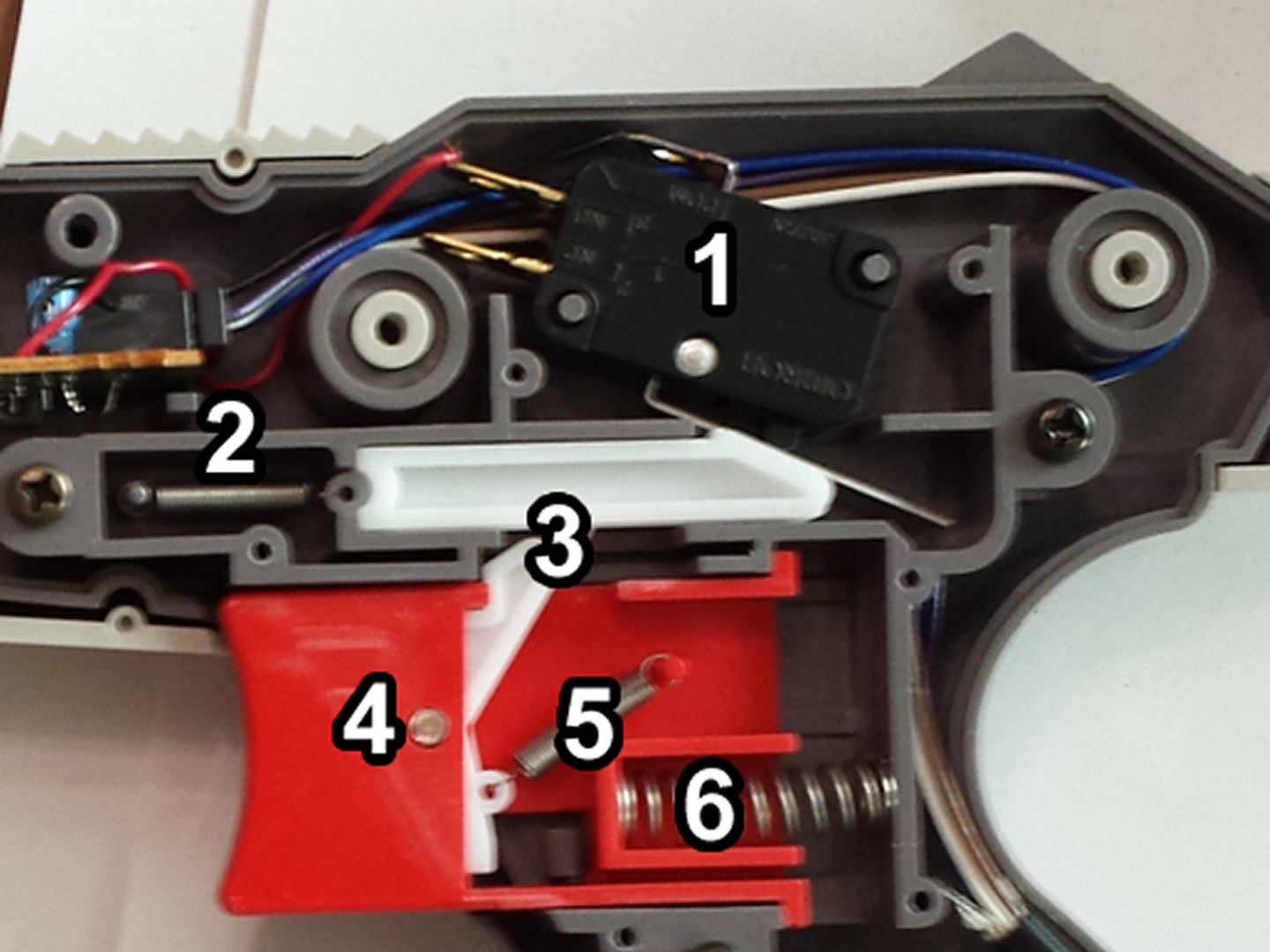 As time passed I wanted to come up with a noninvasive solution. Being a microcomputer light gun user the concept of building light gun adapter for one system to another was well known to me. The Sega Light Phaser is one of the most popular guns to do adapters for, as it is of high built quality, has high sensitivity and is very precise. So I did some research and came up with the schematic below. Than I did some quick and dirty testing with a prototype which was successful. Then I build a miniaturized, nicely isolated and pretty version of it for actual usage.

To my great surprise the trigger on the adapted Light Phaser behaves now the same way as those on my modified Zapper or the one from a stock Hyper Shot does. The opposite case which is connecting a Zapper to a Master System wouldn't work like this. Zapper type light guns use lower grade light sensing technology. Those sensors can somewhat measure the Y position on the screen but are not suited to measure the X position. There is at least one Famiclone game that makes use of the Y position reading which is called Strike Wolf.


The actual idea to do this conversion came to me as I read an article on converting a Sega Light Phaser to a MSX written by FRS. It caught my attention as usually one would take and adapt a Zapper type gun instead as those guns are much more similar to the ASCII Plus-X Terminator Laser or the MHT Ingenieros Gun-Stick which are the guns the MSX used. The link to this article is copied to the footer of this article. The idea for the inverter circuit I took from 133MHz who did a Sega Light Phaser to Atari 800XL adapter. Links to this blog and to his YouTube channel are in the footer of this article. My acknowledgement goes to both FRS and 133MHz without who I wouldn't have done this adapter.